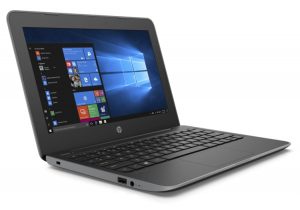 HP has announced a new entry-level notebook targeted at students. The HP Stream 11 Pro G5 is ready to launch next month with some interesting features.

For example, the 11.6-inch screen can be opened up completely flat giving some options for media consumption for group projects with featured touch control for versatile and easier use. It does, however, come with a resolution of just 1366×768 pixels.

А Gemini Lake Intel Generation processor powers this versatile notebook, the best configuration being the Pentium Silver N5000 chip. It has 4 cores with a max frequency of up to 2.7GHz and an integrated GPU Intel UHD Graphics 605.

Users can order their machine with up to 8GB of DDR4 RAM and 2 options of eMMC storage – 64 or 128 GB. It does naturally come with a Wi-Fi adapter and a webcam. Unfortunately, the ports are rather limited with just 1x USB 3.1 Type-A and 1x 2.0 Type-A with surprising inclusion of an HDMI 1.4 port. 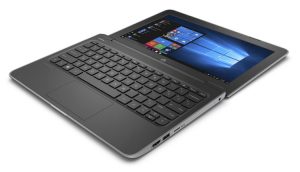 The laptop comes in a rugged case with IP41 and MIL-STD 810G standardization meaning the device can survive a fall from up to 0.6m making most of the hazards in classrooms accounted for.

Additionally, the machine’s battery life is claimed to be up to 12 hours with a single charge but that’s usually a little exaggerated. It does come with Windows 10 preinstalled but the price is yet to be announced.

HP has been battling with Lenovo for the student-grade laptop market and this is yet another possible budget option. While it doesn’t look like a super promising deal, we can’t be sure where to put it until we know the price. The 180-degree screen seems like a feature that’s not going to be used very much in the classroom since the screen is rather small making it hard for larger groups of students to see properly. That said, HP and other manufacturers offer even more flexible screens with similar configurations and variety of other features.

When the price is announced we would be able to compare it to similarly priced notebooks or even tablets to find exactly how good this deal is. In the meantime you could check some offers on student laptops: Buy from Amazon.com (#CommissionsEarned)