[Specs and Info] Intel Arc Alchemist – Intel reveals its discrete graphics, but there are still many unanswered questions 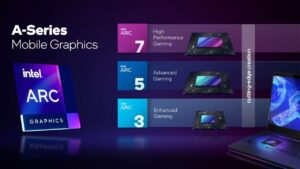 With a color scheme so dear to our hearts, team Blue is becoming team Purple, at least in the GPU department. At last, the time has come when Intel releases its Arc discrete graphics, albeit only for laptops, for now.

Now, there are three discrete GPU manufacturers, which will bode well for the industry, when the third player is as big as Intel. They even have an experienced veteran at the helm, in Raja Koduri, which so far hasn’t disappointed.

Today we are giving you a quick overview of the new Intel Arc Alchemist GPUs.

Intel has decided to use their most familiar naming scheme, copy the Core series of CPUs’ hierarchy and adapt it for their GPUs. The SKUs are split into three categories: Arc 3, Arc 5, and Arc 7. So far, only the Arc 3 is available, which is the entry-level solution, which would provide Enhanced Gaming in the words of Intel. Arc 5 and Arc 7 can be expected at the start of summer. The architecture uses a new compute unit called an Xe Core. The Xe core houses 16 Vector Engines, which are similar to the Execution Units in the Iris Xe integrated GPUs. Paired with them are 16 Matrix Engines, solely for machine learning and AI accelerated tasks, such as the XeSS upscaling tech, which is very important for gaming. 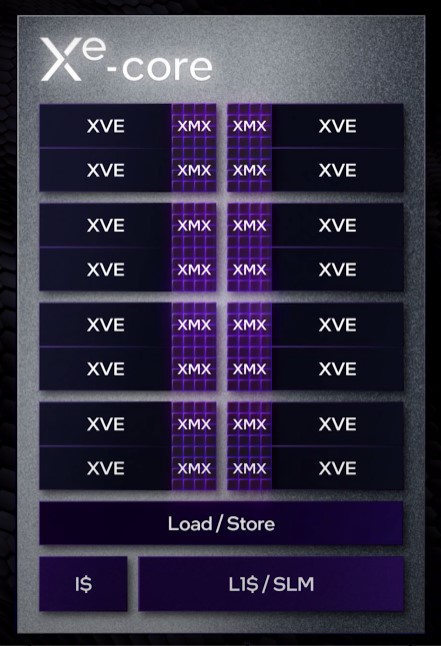 Bear with us, as there’s more. These Xe Cores are paired in fours to create a Render Slice, which also contains hardware Ray Tracing cores, along with all of the other necessary components, such as Geometry and Rasterizing cores. The Render Slice is the backbone of these GPUs, as they are completely modular and can be configured to create different chips, in terms of performance. 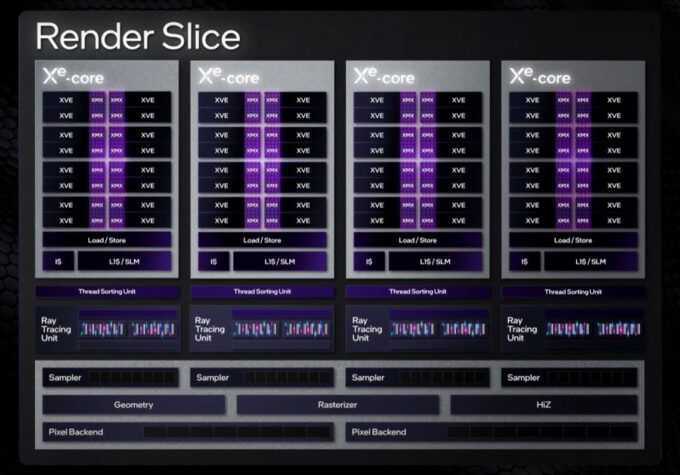 Beyond gaming, there’s a lot more to offer with these GPUs, as the new Xe Media Engine presents a new encoding technology that supports various high-quality video codecs for quick high-resolution rendering. The new Media Engine works very well with Deep Link, which can harness the power of discrete and integrated graphics to work better together in many Creator apps.

In simple terms, it can balance the power depending on the workload. One amazing thing about the technologies is that they are open source, which is a big statement from Intel, as companies can implement it in their software free of charge. We have always been fans of open source projects, so it’s great to see this from Intel, as well as AMD, which has released several of their technologies for free, for others to experiment with and adapt.