Plastic, metal and glass – analysis of the three most commonly used materials in mobile technology manufacturing 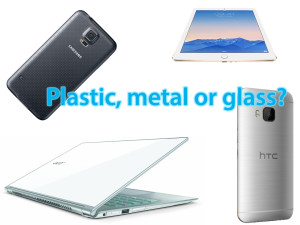 When it comes to mobile devices, build quality has been one of the most discussed topics for several years now. With the launch of iPhone 4, Apple proved to the world that you can use different materials in the construction of smartphones. With its refined design, metal frame and front and back glass panels, it won many followers. But are those the only advantages of glass and metal?

With the increasing competition and rapid technological development, top specs such as core frequency, RAM, etc. are considered default for every new flagship device made by the major manufacturers. The things that first catches the consumer’s eye when looking for a new mobile device are design and construction. Almost everybody who deals with reviews of smartphones, tablets or laptops is looking at the materials only from a design perspective, but that’s not the only vantage point. Glass and metal and have different properties that affect the performance and durability of the phone.
In this article, you will find a detailed analysis of the three main materials used in creating today’s mobile devices and what impact they have on the end user because ultimately, that’s most important.

There are many kinds of plastics, but the one that we are going to take a look at is polycarbonate. It can be characterized by high impact strength because it is flexible, and relatively good resistance to high temperatures. The best examples of devices made from this material are Samsung’s Galaxy S line (until SGS 6), last year’s flagship from LG – LG G2, the Nokia Lumia devices and Google’s smartphone – the Nexus 5. Almost all tablets are made of plastic, same as most of the laptops on the market. To start on the advantages of this type of material, the first thing we have to mention is the great mobile connection. Polycarbonate doesn’t obstruct the passage of various types of waves, and thus manufacturers can afford to use internal antennas. It is also very inexpensive to machine, which automatically reduces the price of the final product. So much for the advantages of this material.

Alongside the pros of polycarbonate, there are also a lot of cons. For starters, it is extremely ineffective when it comes to thermal conductivity. It is noticeable that under equal conditions, the devices made of plastic give significantly worse results in the performance tests. This is because polycarbonate has 0.22 W/m*K (Watts per meter Kalvin) conductivity, and for comparison, aluminum has 205 W/m*K, magnesium – 156 W/m*K and ordinary glass – 0.8 W/m*K. Because of the heat, the processor and graphics chip are unable to reach the required clock frequencies due to precautions of overheating. Some of you might say that plastic is better at protecting the internal components, and it can absorb the impact due to its flexibility. Sadly, this isn’t exactly true since the modern understanding of a good smartphone from a designer’s point of view is that the device must be as compact and as thin as possible, but at the same time, it must posses a large screen and every functionality available. This leads to zero gap between the housing and the hardware found inside the device. Since the antennas are relatively bigger than the other separate components, engineers often put the connectivity systems at the back of the phone (shown in the photo below) and in a collision or drop, the plastic bents, deforming and damaging the internal parts.

Metal, on the other hand, is considered by people in the industry to be superior to plastic. This of course is not very far from the truth, but at the same time, there are other things that need to be taken into account. Manufacturers of mobile devices use primarily aluminum and, rarely, magnesium, the second of which serves as a frame in the middle and the internal part of the phone. For laptops, metal is used in the Apple Macbook series and the new ASUS G501. As we already mentioned, polycarbonate doesn’t protect the internal components very well, while aluminum is strong and hard enough and doesn’t need a buffer zone between the components and the housing. Unfortunately, aluminum used in the construction of most phones is anodized to give it a more aesthetic appearance and when dropped the damage is more noticeable than with polycarbonate. Another advantage that cannot go unmentioned is external antennas. Metal doesn’t let different types of waves pass through it, therefore the Wi-Fi signal and transmission of the mobile operator cells are impeded. For this whole metal body concep to work, it requires an external antenna. The best example for this is HTC’s flagship line HTC One. Models in that line have discrete plastic strips at the back, which serve as “windows” for the antennas to provide better signal. In the end it turns out that an external antenna has better connectivity than an internal one. The higher levels of EIRP in the One (M8) than in the Galaxy S5 serve as proof of this. EIRP is the equivalent isotropically radiated power, and it is the key indicator for signal strength, although the effective isotropic sensitivity (EIS) should be taken into account in order to gain a more comprehensive idea about these things.

Let’s go back to the aforementioned theory that plastic devices perform worse than metal ones under equal conditions and support it with some statistics. In the graph below, you will see the obvious difference between three different models, each being representative of a different material used in its assembly. The test we ran is from GFXBench 3.0, and it shows the frames per second (FPS) while gaming on a heated device (at the end of its battery life). The HTC and Samsung phones are equipped with the same graphics accelerator and the same chipset (the only difference being the clock frequency of the processor, 2.5GHz on the S5 vs 2.3 on the M8), but the significant difference in FPS is clearly evident.

However, like any other material, aluminum also has its drawbacks. Although both One (M8) and iPhone 5s have external antennas, there is a noticeable difference in the signal. If the antenna is completely covered by your hand or it comes into contact with another object which carries out electricity or waves, the signal is lost. This effect varies in strength and characteristics at the different frequencies transmitted by the operator. You can see the tests results in the image below.

In addition to connectivity issues, aluminum is more expensive to process. The metal itself is not that expensive, but when put into production, its price rises considerably. Another factor that affects the end user is the aforementioned property of the material to conduct heat. Although it is particularly gentle to the internal components of the device, it isn’t pleasant to touch when used for a long time. When a polycarbonate device heats up you can “feel with your finger” exactly where the processor is, while with the aluminum smartphone there is no way to feel it, because the heat is evenly distributed throughout the whole back, creating some discomfort. However, after the phone is left idle, the metal body cools off faster than the plastic one. It is good to mention that magnesium has all the pluses of aluminum but it’s also stronger and doesn’t deform as much. Therefore, magnesium is the better choice of material, but unfortunately it is prone to reacting with oxygen – it oxidizes and loses its properties. This is why most manufacturers use it as part of the internal metal structure of the device.

Glass is also one of the preferred elements for some manufacturers. The most widespread technology is glass tempered with aluminosilicate, or Gorilla Glass (the other, more popular, name of the material). The aluminosilicate is a homogeneous material of aluminum, silicon and oxygen, and Apple were the first ones to take advantage of the production of Gorilla Glass, produced by the Corning company. But why choose glass as the base material of the housing? It belongs to the group of mineral aluminosilicates and its hardness is 8/10 on the Mohs scale. Therefore, it cannot be easily scratched, but it breaks under heavy impact because it isn’t elastic. It also transfers heat slightly better than polycarbonate, but isn’t nearly as good as aluminum. The material doesn’t interfere with signals passing through and is relatively difficult to model. Also, the panels made of glass should always have a flat surface. Typical examples for this are Sony’s tablets and Z series smartphones, except for the Z1 Compact, where the back panel is made of plastic which imitates glass.

The Japanese have again bet on aluminum and glass filled polyamide with 30% glass fiber – a type of plastic created for constructive purposes. It has very good wear resistance for the construction of the rear panel. We have already mentioned it – this material is used to make leading roller lashings of elevators – while the metal parts wears off, the polyamide roller has only prints of the rope. Two glass panels are located above the polyamide, both protected from scuffs and scratches of course. Both the screen and the entire front panel are covered by a piece of glass, which is not manufactured by Corning (Gorilla Glass), but by the Japanese company Asahi Glass Co. You might not have heard of it, but it is actually a key part of the automotive giant (and not only) Mitsubishi Group. AGC call their glass Dragontail, and one of their clients is Sony, who finds use of their product in the Xperia product line. Alcatel is another company that uses the services of AGC.

After all, the most important thing is what the consumer wants and how the manufacturer has applied their industrial design, because it is entirely different from the aesthetics approach. Larger manufacturers pay a great amount of attention to this type design, since it determines the overall interaction between the user and the smartphone, tablet or laptop. Every day, you have to touch your device and use it in different situations, and for this purpose, it must be comfortable and pleasant to handle, in order to reach the final goal – better user experience. Unfortunately, there is no way to appreciate the overall design of a product unless we are faced with bad and incomplete designs. In any case, thanks to the rapid development of technology, each subsequent device is more advanced, more pleasant and more convenient. Also, the combination of different types of materials in one device simultaneously eliminates the weaknesses of some of them and contributes to the improvement of the final product.

Which material do you think is best for the housing of a mobile device?

although magnesium is my favorite metal, I must clarify some mis-statements: 1. Mg is lighter than Al. It is not stronger than Al, however, when you take into the consideration of its density, then on a strength-to-weight RATIO it is stronger. In some cases you need to use more Mg to match the stiffness and strength requirements of Al. It does oxidise over time, but when coated it is not an issue. Your laptops and many cell phones and cameras use Mg all the time!