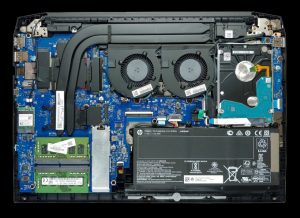 The HP Pavilion Gaming 15 (15-ec0000) is a decently-priced laptop that can be configured with powerful hardware and efficient Zen+ processors. In our case, we had our hands on a notebook that is configured with a fast AMD Ryzen 7 3750H (with a 35W TDP) and NVIDIA GeForce GTX 1660 Ti Max-Q.

The laptop also has good upgradability (including NVMe and SATA slots, and a possibility for up to 32GB DDR4 memory), a nice keyboard, and capable, fast 144Hz panel that is PWM-free and color-accurate at the same time. By the way, you can check the performance of the CPU versus some fast Whiskey Lake processors and the GPU compared to a full-blown RTX 2060.

A lot of people are making one small mistake when buying a new laptop that can ruin the whole experience after the purchase – they underestimate the quality of the cooling solution that is inside of the machine. Essentially, its job is to cool down the internals (CPU and GPU mainly). If these components aren’t well-cooled you can expect decreased performance since their frequencies will throttle down because of the high temperatures (decreasing the clocks leads to lower temperatures and to lower performance as well).

There are notebooks with good cooling that can extract everything from the hardware, which ultimately results in higher frequencies, fps, and overall performance. Just like the HP Pavilion Gaming 15 (15-ec0000). First of all, if you want to have a look at the cooling or you just want to upgrade the laptop you’ll find that it’s not a hard job to open the bottom panel – you just have to unscrew 7 Phillips screws and that’s it -easy peasy. For more detailed look you can check out our disassembly video:

Let’s check the cooling itself after the panel is already removed. It’s a simple but yet effective one – there are two thick heat pipes that cool the processor and video card, and two fans that blow fresh air straight to the heat sink. The “interior” of the laptop is tidy- everything is in place and looks clean and spacious. 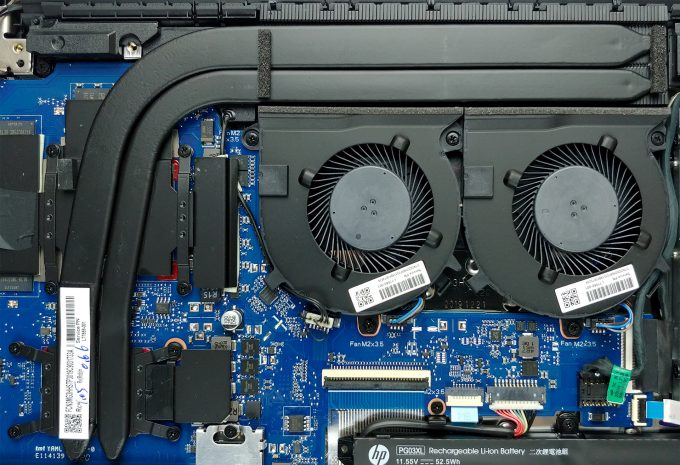 Now, let’s check what a good cooling solution like this one is capable of. As you can see, this is the best performing AMD Ryzen 7 3750H that we have tested up to date. The most important thing here is its ability to maintain 3.53GHz at just  67°C for a long time under load, which is an unbeatable result in our chart. If you tend to play a lot of games you can be sure that the CPU will not throttle down its frequencies significantly during long hours of gameplay.

In this test we use 100% on the CPU cores, monitoring their frequencies and chip temperature. The first column shows a computer’s reaction to a short load (2-10 seconds), the second column simulates a serious task (between 15 and 30 seconds), and the third column is a good indicator of how good the laptop is for long loads such as video rendering. Sure, the ASUS TUF FX505 has the same temperatures during heavy loads but the CPU clock is 150 MHz down compared to HP Pavilion Gaming 15. This laptop is able to squeeze every bit of performance from the 3750H.

With HP Pavilion Gaming 15 (15-ec0000) you can enjoy a max performance with both CPU and GPU at the same time – money well spent.