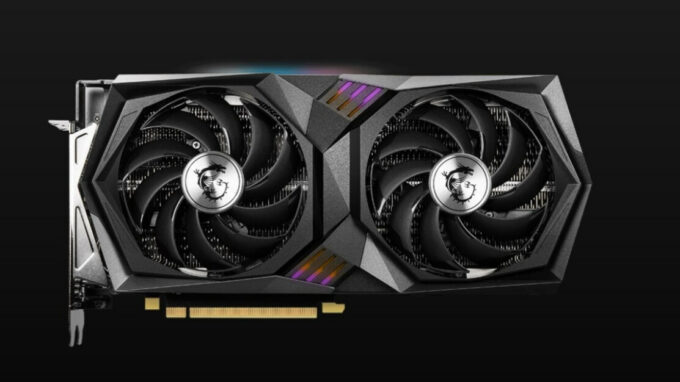 The GeForce RTX 3060 12GB is a bit of a strange case. Actually, there is nothing particularly wrong with this GPU – the strange thing is, when the GeForce RTX 3080 10GB debuted, the green company was ensuring everyone that 10GB video memory is just fine even for 4K gaming. Some months later, they released this mid-range GPU with 12GB of VRAM buffer which is more than you got with the RTX 3070 Ti or even with the RTX 3030 10GB.

On the other hand, the memory configuration is tied with the memory bus, and in this scenario, the 12GB memory option sounds like a logical choice for a 192-bit bus (the other possible variant is 6GB VRAM which should be extremely too low for some of today’s games).

So, we got a mid-range GPU that has a bigger VRAM buffer compared to its bigger sibling – the RTX 3060 Ti 8GB. However, even the competition from the red team (AMD Radeon RX 6600 and Radeon 6600 XT) offers 8GB of video memory as well. If we put the still-not-normalized GPU pricing aside, the RTX 3060 12GB looks like a decent mid-range video card, at least on paper.

For today’s review, we got the MSI RTX 3060 GAMING X 12GB for testing – this one feature a massive dual-fan cooling solution (for a GPU of this caliber), a metal backplate, it doesn’t come with a million glowing RGBs, and we think this one should be a near-silent product given our previous experience with the MSI RTX 3060 Ti GAMING X OC which has a similar cooling design.

The GPU drivers for the MSI RTX 3060 GAMING X 12GB can be found in the following link:
https://www.nvidia.com/en-us/geforce/drivers/

As we said in the introduction, this video card looks almost the same as the MSI RTX 3060 Ti GAMING X OC. The box is the same, the same goes for the accessories and for the overall look of the GPU. The package weighs 1567 grams while the GPU weight is a bit below one kilo – 996 grams. The box is super sturdy and inside of it, the GPU is well-secured as well. 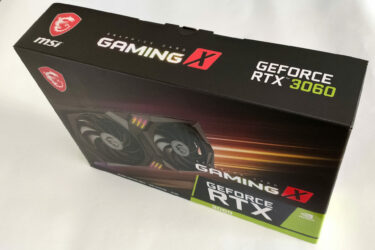 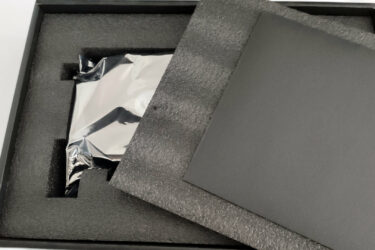 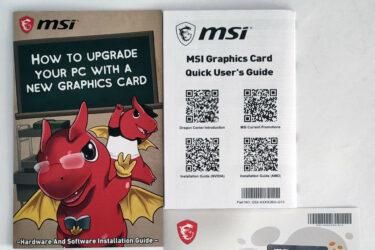 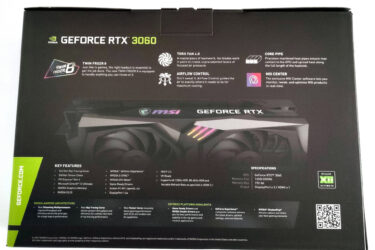 No surprises here, this is a typical MSI design and this cooler can be found in some other video cards from the same brand. Speaking of which, the GPU is 276 mm long and it should fit with ease in most modern ATX and mATX cases. The video card takes 2.5 slots so it can possibly block one PCIe slot depending on what motherboard you have. 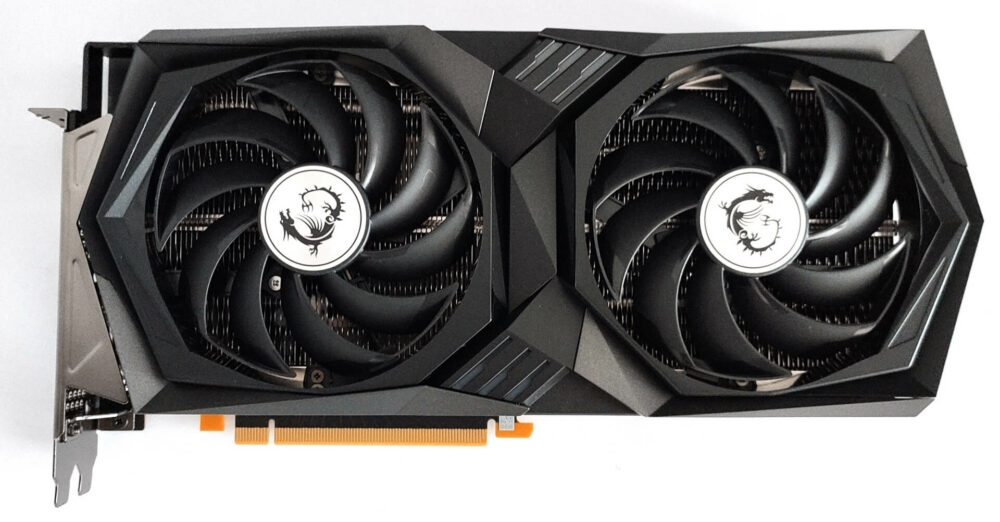 The pair of fans is called TORX FAN 4.0 and it’s their latest and greatest version which in theory should be better compared to the previous variants in terms of cooling. Aside from that, the fans look good and modern while the shroud around them is made from plastic which doesn’t feel cheap on the touch and it’s sturdy at the same time. Yes, a metal shroud is a rare find these days.

For powering the graphics card, you have to connect an 8-pin and a 6-pin PCIe cable as well. This sounds like overkill for a GA106-based GPU but it’s weird that the maximum power limit is just 180W – that’s too low for an 8-pin + 6-pin configuration. 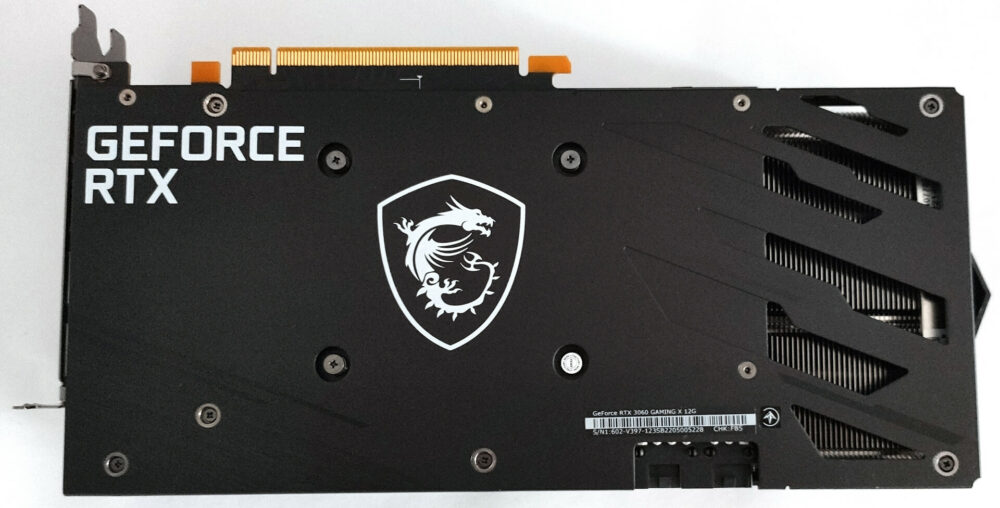 The metal anti-bending strap is here again – it looks good, and it provides some additional reinforcement to the overall sturdiness of the card. The backplate is made of metal and it has some cut-outs so the hot air can be dissipated more quickly.

So, let’s test the GPUs’ raw performance with the aid of some popular benchmarks like 3DMark Fire Strike, 3DMark Time Spy, and Unigine Superposition. Let’s the stock results. 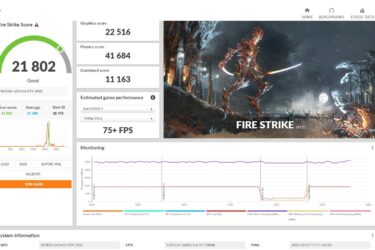 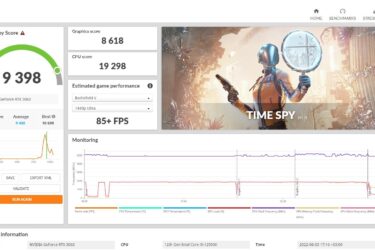 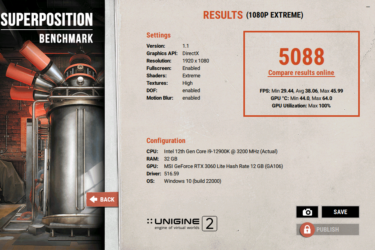 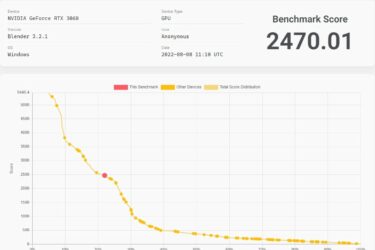 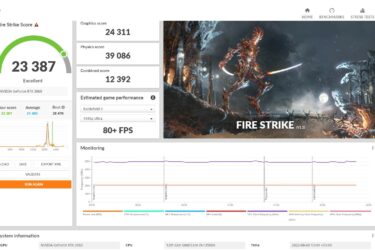 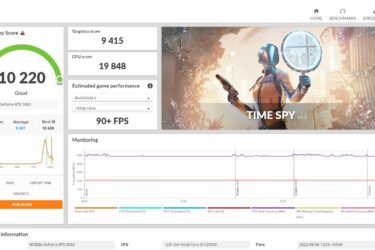 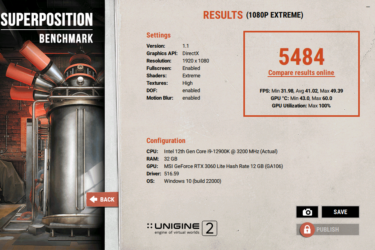 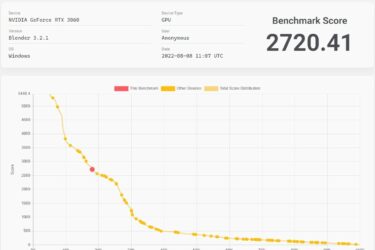 The gain from overclocking is around 9% on average.

You can have a look at the BIOS of the GPU and its stock clocks. The RTX 3060 12GB is a more efficient chip compared to the GA104-based RTX 3060 Ti and in our case, the cooler of the MSI RTX 3060 GAMING X 12GB is almost the same as the one that can be found on the MSI RTX 3060 Ti Gaming X LHR – this leads to some advantages. The first one is the idle temperature – 32°C is a great result. We will speak about the other pros in a minute. 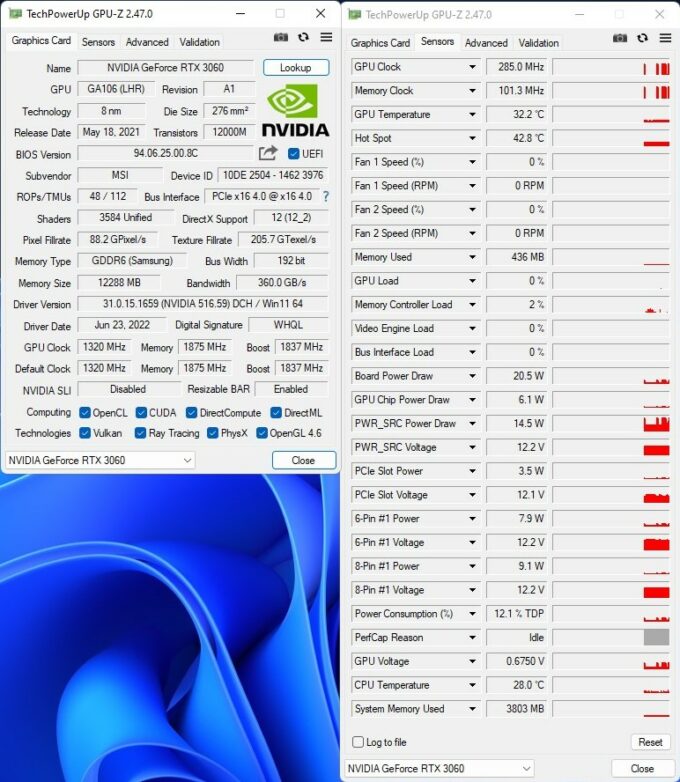 As you can see from the BIOS information, the stock power limit is 170W and it can be increased to just 180W – such a shame. Some not-so-premium RTX 3060 12GB from other brands have bigger TGP limits compared to the card that we’re reviewing. 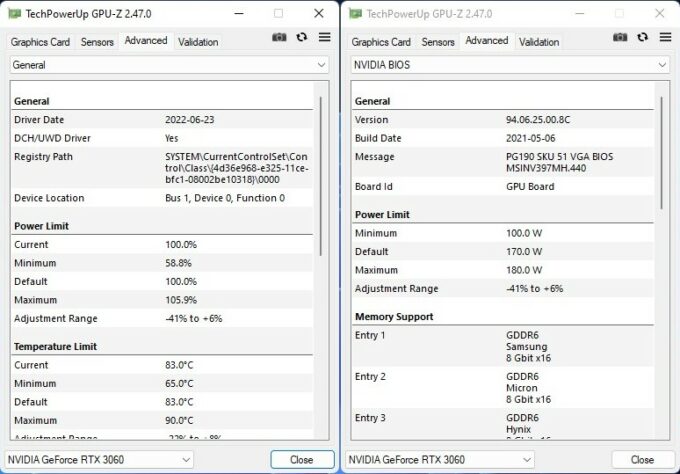 Overclock
We’re using Unigine Heaven 4.0 in 4K for monitoring the stock and OC frequencies while testing for stability. Let’s inspect the stock frequencies. The advantage of having such a big cooler on an efficient chip like the GA106 is the temperatures under load as well as the low sound levels coming from the fans. The results are great – 58°C core temperature and 1200 RPM fan speed. This is definitely a ner-silent and cool under load video card. 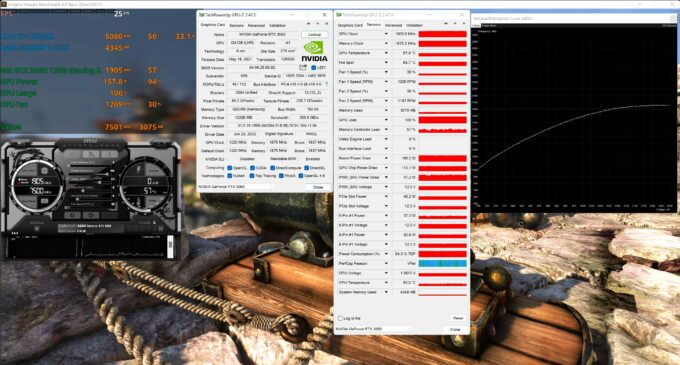 We tried some OC as always. Undervolting the GPU to exactly 1.0V is giving us some room for frequency increase. In this scenario, we aren’t lucky enough because the maximum possible GPU core clock is 2055 MHz. Still, the Samsung memory overclocks good – +1250 MHz (8750 MHz effective clock). Overall, the clock frequencies that we were able to reach using this particular GPU are decent. Keep in mind that the core is undervolted and compared to the stock results, the temperature, and the fans rotating speed are the same as the stock ones – 58°C core temperature and 1200 RPM for the fans. No matter the fact that the GPU is faster because of the bumped clocks, the temperatures, and the noise levels are not increased – neat. 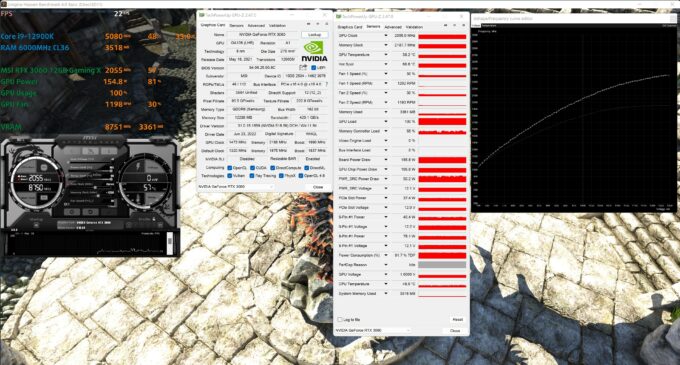 Cyberpunk 2077 on 4K and Ultra details is punishing the core clock harder compared to the 1080p resolution – 1819 MHz. However, the core temperature and the noise coming from the GPU are virtually the same across all three resolutions. 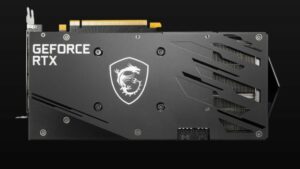 The MSI RTX 3060 GAMING X 12GB has enough power for playing on 1080p and 1440p with greatly bumped visuals. Gaming on 4K resolution is possible too with lowered visual quality which depends on the game you’re playing – if the particular title supports DLSS it’s the easiest way to boost your FPS on 2160p resolution (or you can just simply lower the visuals until reaching comfort FPS values). The tested GPU has a good build quality – the card feels solid, it comes with a metal backplate and a metal anti-bending strap that protects the card from damage during installation, and GPU sag isn’t a problem at all. The shroud is plastic but it doesn’t feel cheap and it’s sturdy. The video card isn’t glowing like crazy which may be a con or a pro for some of you depending on your personal preferences.

Using the MSI RTX 3060 GAMING X 12GB as is (ergo, on stock clocks and voltage) is just fine – the GPU is always cool and quiet and it’s hard to hear the fans spinning at all if the video card is fitted in a decent case with some amount of airflow. Overclocking the graphics card isn’t complicated if you have previous experience and the only downside (as always) is the fact that this process takes some time. However, we were pretty pleased with the results that we saw – the performance bump was just 9% but aside from that, the thermals of the GPU and the noise from the fans remained unchanged compared to the stock levels. This is possible thanks to the beefy cooling solution that can be found installed on other more expensive and faster MSI GPUs.

The MSI RTX 3060 GAMING X 12GB is a product that doesn’t have a lot of cons, the main disadvantage should be the modest TGP limit which can be increased to just 180W while the GPU is configured with one 8-pin and 6-pin power inputs. However, the performance of the card is good and it can be considered as a super budget 4K gaming solution if you don’t mind spending some time tweaking the in-game visual settings or/and using DLSS at the same time.