The time has come for another epic laptop battle which is definitely going to catch the attention of gaming enthusiasts. On the one side, we have a high-end gaming beast which is a refresh of the previous generation of ROG machines in the face of ASUS GL503GE, whereas the mid-range model Lenovo Legion Y530 – a worthy successor to the best selling Y520, waits on the other side. We will check their performance, build quality and other essential specification to help you decide which is the more suitable device for you. 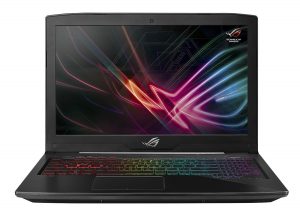 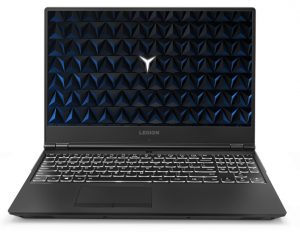 Firstly, we shall turn our heads to the construction of both devices. The ASUS GL503GE incorporates a simple design which is a breath of fresh air compared to the gaming-centric aggressiveness of other similar notebooks. Here, the main order of the day is plastic with the lid being brushed aluminum, and although it is prone to twisting, pressing the back of the panel doesn’t cause ripples on the LCD screen. What contributes to the overall sturdiness are its hinges that boast smooth linear travel and make opening the notebook with one hand possible. As for the interior, although it features a plastic finish, it feels premium and quite robust. Beneath the finish, we notice carbon fiber threads that are reminiscent of the Dell XPS series.

Moving on, unlike its rival, Legion Y530 employs only plastic in its construction. Lenovo has also opted for a more simplistic appearance as its matte black body lacks any RGB lights, aggressive strips, and other flashy elements characteristic of other gaming devices. In terms of dimensions, Legion Y530 happens to be the slightly more portable gaming device measuring at 23.9 – 24.9 mm in height and tipping the scale at 2.30 kg (5.07 lbs) as opposed to 24 mm and 2.6 kg (5.73 lbs) respectively. Opening the lids of the notebooks reveals the input devices. ASUS has included a standard touchpad with dedicated mouse buttons which is comfortable to use and extremely responsive. However, we have some complaints about the keyboard. Although it boasts clicky feedback, standard layout, and good key spacing, the key travel is not ideal for gaming as it’s rather short, and also the navigation keys are slightly crammed up and not big enough. However, we should mention the additional buttons located above the keyboard for volume control, quick access to the ROG Gaming Center allowing you to easily adjust the LED keyboard backlight, cooling fans, display profiles and other settings.

Moving on to Legion Y530, the gaming beast features a keyboard which is identical to the one we saw in Y520. We can clearly see why it has become one of the main selling points – you are presented with long key travel excellent for typing and gaming, bigger arrow keys and media control buttons so the layout will definitely suit gamers. The touchpad is also comfortable to use sporting dedicated mouse buttons. The Legion Y530 also doesn’t drag behind with almost all its ports located along its back. There is a full-sized USB 3.0 Type-A port each on both left and right sides. Right next to the one on the left we see an audio jack, whereas a hardware reset opening is located next to the one on the right. And finally, along the back are distributed a USB 3.0 Type-C, Mini DisplayPort 1.4, USB 3.0 Type-A, HDMI 2.0, Gigabit Ethernet (RJ-45), charging port and a lock slot. Given the nature of the panels the gaming devices use, it won’t come as a surprise that the viewing angles on GL503GE’s display are quite uncomfortable, unlike Y530’s panel that boasts comfortable ones. However, tables turn as far as brightness levels are concerned, where the GL503GE beats the Legion Y530 with a maximum brightness of 351 nits in the center vs 265 nits respectively. In terms of color temperature, both devices have quite colder than the optimal – 7650K on the GL503GE and 7760K on the Legion Y530. The former also exceeds its rival when it comes to contrast ratio with 1280:1 vs 1100:1 respectively. And so we continue with the color reproduction. GL503GE’s panel stands out super vibrant colors covering completely the sRGB color gamut and 96% of the DCI-P3. And with the help of our Gaming and Web design profiles, the colors become accurate enough for color sensitive work. On the other hand, Lenovo’s Legion Y530 display covers only 55% of the sRGB which is not suitable for color editing. When it comes to color accuracy, ASUS GL503GE has an average dE before calibration of 10 and after calibration, the value is reduced to 2.2 (lower is better). On the other hand, Y530’s average dE is 5.2 before calibration and after it is significantly reduced to 3.3. Moving on, we are pleased to inform you that Lenovo Legion Y530 does not use PWM to control monitor brightness, making it safe to use in the viewed aspect. However, we cannot say the same about ASUS GL503GE, whose panel uses PWM to adjust the brightness of the screen up to 95 nits. On a more positive note, this is done with a very high frequency that doesn’t particularly have such a negative impact on one’s eyesight. This issue can be completely fixed by our Health-Guard profile.

Here at LaptopMedia, we create a set of custom-tailored profiles for every notebook we review. They boost the productivity of a display and reduce negative effects such as blue light emissions and PWM. You can read more about them here.

A similarity between the two gaming devices that we instantly notice is the 8th generation Intel Core i7-8750H processor. It features six physical cores ticking at base speeds from 2.2 GHz to 2.8 GHz, while the Turbo one is 4.1 GHz (up from 3.8 GHz). Additionally, the TDP of the chip is rated at 45W and it also boasts 9 MB of cache (vs 6 MB on Core i7-7700HQ).

More information about Intel Core i7-8750H and its position in our Top CPU Ranking you can find HERE.

What’s more, both notebooks also rely on the same graphics processors. They are equipped with the NVIDIA GeForce GTX 1050 Ti based on the GP107 chip paired with 4GB of GDDR5 memory connected via a 128-bit interface and 768 CUDA cores.

More information about the GTX 1050 Тi and its place in our Top GPU Ranking you can find HERE. Due to the fact that both models are equipped with identical hardware (CPU and GPU) the power consumption is almost the same. ASUS GL503GE boasts larger battery capacity – 64Wh, while the Y530 has a battery unit of 52.5Wh. The runtimes on both of them are quite good and there is not such a major difference in numbers.

We start with our Web browsing test where our own script browses automatically through over 70 websites. ASUS GL503GE managed to keep the lights on for 330 minutes which is 13 minutes less than the result of the Lenovo Legion Y530 – 343 minutes.

The second test is for Video playback where we put an HD video on loop. ASUS GL503GE managed to score 312 minutes on a single charge, while the Y530 lasted for 278 minutes.

And finally, our Gaming test using F1 2015. ASUS’ battery offers 111 minutes while the Lenovo Legion Y530 delivered 106 minutes of gaming away from the plug. 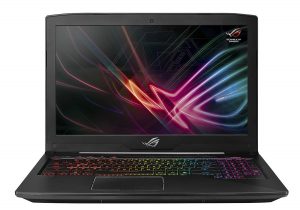 As we have already mentioned, both notebooks feature the same hardware, therefore the performance is very similar too. The GTX 1050 Ti is powerful enough for gaming at high settings in most of the AAA titles. What’s more, lighter games such as CS:GO won’t pose a problem even at maximum graphics. The difference in the frame rates are not so drastic – usually in the 5% range.

We have a new method that evaluates the cooling system and for gaming computers, it comprises of 100% CPU load plus real gameplay test (Rise of the Tomb Raider).

In this test, we reach 100% CPU cores load, while monitoring the fluctuations in their frequencies and chip temperature. The first column shows a computer’s response to a short load (2-10 seconds), the second column simulates a serious task (between 15 and 30 seconds), while the third column is a good indicator of whether the laptop is suitable for extended and heavy loads such as video rendering.

As you can see from the table above, Lenovo Legion Y530 has higher average core frequencies that come at the expense of higher temperatures. ASUS GL503GE also showed decent performance but this time at fairly lower temperatures.

This test is longer. Here, the GPU is loaded to the max trying to process maximum frame rates per second.

Unlike the previous test, here the temperatures and performance seem quite normal. Lenovo Legion Y530 manages to surpass ASUS ROG GL503GE in both aspects.

To sum things up, you won’t make a wrong choice whichever notebook you decide to opt for. Both of them offer a quite simple design which may appeal to the majority of users. However, ASUS’s solution boasts a firm and reliable construction thanks to the brushed aluminum lid and hinges that contribute to the overall sturdiness. On the other hand, the all-plastic body of Legion Y530 doesn’t exactly create this impression. However, it appears to be the slightly more portable gaming device in terms of dimensions.

We also have every reason to confirm that ASUS GL503GE beats its Lenovo rival in the display department. Despite its TN nature, it stands out with its high brightness and contrast, while the serious color deviations can be reduced to a reasonable level thanks to our Gaming and Web design profile. We should also highlight the refresh rate of 120 Hz that, along with the G-Sync technology, will contribute to your smooth gaming experience. The only drawback is the presence of PWM up to 95 nits but this issue is easily fixed with our Health-Guard profile.

As for battery runtimes, both notebooks are almost on par. However, ASUS’ 52.5Wh unit provides slightly better battery life with the most impressive result being 330 minutes on our Web browsing test. And finally, the cooling systems of the two notebooks seem good enough to handle effortlessly i7-8750H + GTX 1050 Ti.