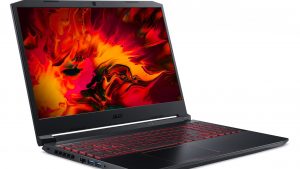 Like many other new devices, the new version of the budget gaming classic Acer Nitro 5 has some updates under the hood and a few slight exterior changes. Expectedly, the new version can be picked with the latest Intel 10th gen Comet Lake-H processors. Acer has decided to not go too far with the video card options and the NVIDIA GeForce RTX 2060 is the most powerful GPU variant.

There are some small improvements here and there but this is the same good “old” Nitro 5 and it still looks up to date in 2020 despite the very minor changes on the outside.

You can check the prices and configurations of the Acer Nitro 5 (AN515-55) devices in our Specs System: https://laptopmedia.com/series/acer-nitro-5-an515-55/

You can check the prices and configurations of the Acer Nitro 5 (AN515-54) devices in our Specs System: https://laptopmedia.com/series/acer-nitro-5-an515-54/

The well-recognizable exterior is a bit changed. For example – the lid, which looks a bit flatter and has two new design elements on both sides. The back grill is totally redesigned and now has a “Lamborghini exhaust” look. The rest of the laptop is almost unchanged. The weight is the same – 2.30 kg but the new one has a slimmer profile (23.9 mm) which is good for portability and it can fit more easily in a bag.

It looks like the 2020 notebook uses the same backlit keyboard unit as the 2019 variant. That’s good news because it has keycaps with nice key travel and good feedback alongside highlighted WASD area and full-sized arrow keys.

The last year’s device offers plenty of display options but at least for now, we don’t have much info about the display choices, the new one has to offer. A Full HD panel with 144Hz refresh rate is confirmed and if it’s the same as the 2019 one we can confirm that it’s a great display but we have to test it first. There is a 120Hz 1080p panel as well.

Hardware: 10th gen Comet Lake-H processors and up to RTX 2060

The 2020 version of Nitro 5 features refreshed CPUs from Intel like the Core i7-10750H and the Core i5-10300H. These are the refreshed versions of the Coffe Lake’s i7-9750H and i5-9300H so you can expect a slight-to-modest bump in terms of computing power. The GPU options are almost the same – NVIDIA RTX 2060, GTX 1660 Ti and GTX 1650. Let’s hope for a better cooling too because the older has a scorching hot shell under heavy load.

Storage and other specs: NVMe, Wi-Fi 6, and the same battery capacity

The battery capacity is unchanged, and we don’t really mind it, given the great battery performance from the last year’s device. As far as upgradability goes, this laptop supports two NVMe drives – the exact same number as the 2019 variant. Moreover, the 2020 version of Nitro 5 supports Wi-Fi 6, meaning you can enjoy a fast wireless internet connection if you have an appropriate router.